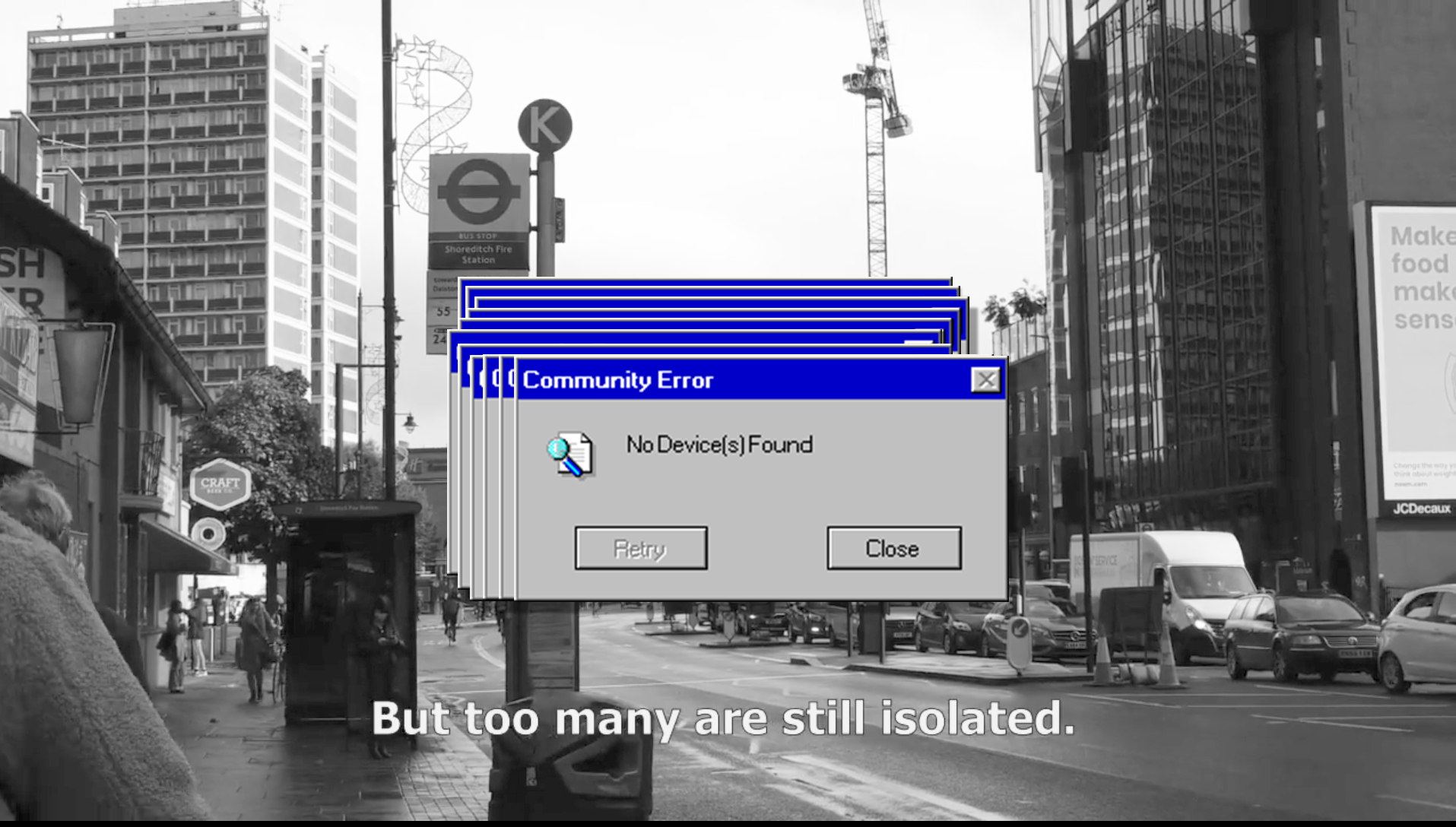 Digital inclusion in a pandemic: Community organising with Citizens UK

In this blog, Jordan reflects on his experiences during lockdown as a member of Hackney & Islington Citizens and the work they did to tackle the local digital divide. Jordan is also involved with UCL as Community Engagement and Public Arts Assistant and works closely with our co-production team.

‘Normally residents are really innovative in the ways they get online- they make use of the libraries, borrow technology from friends and use WIFI at free hotspots. At the start of the pandemic all of those options went.’ ‍— Help at Your Doorstep, an independent charity

Let me paint you a picture, one you are likely very familiar with: London in the pandemic, the streets are quiet, centres closed, shops closed, and people are stuck inside, huddling around a TV, the phone, a computer… Except, there is a part of that picture that is often left out: the low income and internet illiterate, two groups who were deeply affected by the lockdowns. In the age of technology that we are in, we often forget that not everyone has the same level of accessor the whole world isn't "digital by default". No computer means no online meetings for work or school, no ordering groceries, no retail and no Zoom quizzes. And just like that, you're extremely isolated from the world in a pandemic.

What is digital inclusion?

While it is estimated that 96% of UK households had internet access in 2020 (ONS), we found through local listening campaigns that these statistics did not account for households sharing one computer between a family of three or more, inadequate equipment/connection, and elderly people not knowing how to use their internet devices. Also, this is not just about a crisis because of lockdown. The way we learn, find work, and connect has fundamentally changed. More businesses are moving to remote working. So as a community, we need to be ready. We need our neighbours to be ready for this new "digital-first" world.

Citizens UK is a people power alliance of diverse local communities working together for the common good. Citizens reaches out to community groups such as schools, universities, churches, mosques, synagogues, parent groups, health trusts, charities and unions, to become members - asking them what issues are bothering them and then helping to propel them into positions where they can affect issues deeply rooted in their local areas.

Within Citizens UK is the Hackney & Islington Citizens chapter, a community organising alliance from Hackney and Islington boroughs of London, tackling inequality from the bottom up. My journey with Hackney& Islington Citizens began at the end of 2018. I first joined with the hope of making an impact on a project about youth safety but also later pivoted into social isolation.

What I realised from this experience is that the biggest challenge in bringing different self-interests together is to find consensus and develop a common agenda. So many people in our community groups were struggling to stay connected. The process of finding a common voice was a complex series of meetings and workshops, to unpack what we meant by digital inclusion.

Back in 2014, the Government Digital Service developed a scale of digital inclusion ranging from 1-9, from those that don't use the internet at all to digital experts. They found these groups were the most likely to be digitally excluded:

·        people whose first language is not English

There is an overwhelming amount of people that are Hackney natives who fit these descriptions especially within the demographics Citizens’ works with. This is sharply contrasted by the new shiny, gentrified parts of Hackney (Shoreditch) which are booming with affluent tech companies such as Amazon and Inmarstat.

We asked ourselves: is it right that people living right next door to London’s answer to Silicon Valley, should struggle to learn and make a living on 500Mb of data a month? How can we bridge this digital divide? From this, the Shoreditch300 challenge was born. The campaign asked tech companies based predominately in Shoreditch to donate or fund laptops and internet access for 300 local people in need. An important factor of this campaign was, of course, the people of the community and their testimonials.

A major hurdle was how we would be able to reach these companies that are constantly bombarded with requests for them to open their pockets. Through workshops, we decided as a community that a video letter illustrating how crucial it is to stay online during a pandemic, the plight of the locals of Hackney most affected by the digital divide and directly ask for help from tech leaders.

Fortunately, I had some experience with filming and editing so got to lead on this section of the project, but the whole process was co-produced by the community. The majority filming took place under restrictions which meant we had to get creative in that ways we’d direct the video letter and the many members we hoped to include without face-to-face contact. The main script was reviewed by community representatives and individual accounts in the video were each respondent's unabridged account, only prompted by questions such as "Finish this sentence: Having access to the internet helped me…”

We also created a short guide to follow to get a somewhat consistent style and quality throughout the film, which was informed by our listening campaign, it was very clear that some people were much more tech-savvy than others.

For a video embedded deeply in Hackney, particularly Shoreditch, the team (Froilan from Citizen’s UK, Alcinda from Mind, and me) decided to get a lot of our B roll footage (supplemental or alternative to the main shot, usually to set the tone or give greater context to a film) from key areas around Shoreditch to tie in with the testimonials of the community. While I did all the editing, it was a group effort. Every step of the way I had feedback across a team of representatives from each of our community groups.

Once ready, there was a consensus that we need to put the video letter on a social media channel directly reaching out to key figures in the relevant companies. The groups researched key figures, settled on LinkedIn as the most relevant channel and we released it on Black Friday which is considered the busiest shopping day in many western countries, the first one since the pandemic began which was set to be the tech sectors most profitable as the shopping experience would be purely online.

Following that we had quick responses from 3/5 of the corporations we targeted (Amazon, Plaid, and Box), ready to meet with us. It came as a huge shock to me, who had put the work in but was very unsure if anything would come from this campaign. Ever the pessimist. I had the great opportunity of chairing the meeting with Amazon and sitting in on other meetings. What I legitimately appreciate in Citizens' ethos is the sharing of power, and for someone like me, who had never chaired something of this size, it was both frightening and fascinating at the same time.

The power of community organising

From this campaign we were able to achieve a huge chunk of what we set out to do. With a donation of dozens of used laptops, £20,000 and a promise of continued support, we were able to help over 200 residents who were previously considered digitally excluded.

Reflecting on the experience, this gave me a lot of confidence in the power of community organising, I believe most people are pessimistic about the power everyday people have in enacting real change outside of established channels (donations for example), and I was one of those people.

I feel that the power that is shared among the community groups I worked with and the creative problem solving developed my practice of contributing my creative talents to causes and evaluating the privileges I take for granted (internet access).