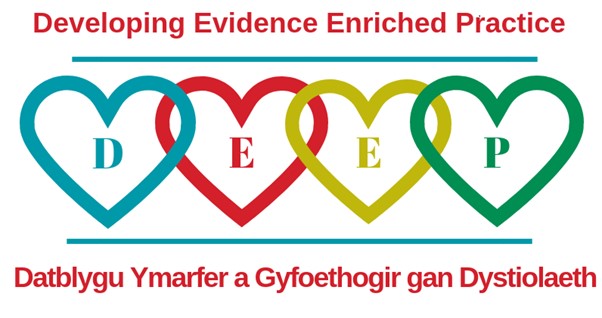 Going DEEP – progress towards using evidence in practice through co-production

The above is one of the key issues identified by Trish Greenhalgh and her colleagues when talking about evidence-based medicine as ‘a movement in crisis’ (Greenhalgh et al 2014).

Whilst these approaches to using evidence may work within technology-focused practice such as mechanical engineering, they are less likely to work in human services such as health, social care and education, where the world is less logical and predictable and often charged with human emotions.

Within the context of human services, a different approach to getting research evidence into practice is required, one that is essentially co-production. In this blog, I would like to outline a co-productive approach to using research evidence in policy and practice that was developed in Wales and Scotland, through initial funding by Joseph Rowntree Foundation. It is called the Developing Evidence Enriched Practice (DEEP) approach.

The role of ‘experts’ and importance of valuing people and context

‘Now that use of expert knowledge is different from having the expert telling people what to do, and I think that’s where I draw the line.  I have no problem with using information that experts have as long as they don’t say this is what you should do.'
— ‍Myles Horton, a pioneer of education

‘The Achilles heel of so much organised religion is that we tend to teach people what to see, rather than how to see.’
— Franciscan friar Richard Rohr

Both of these quotes point to a much more respectful approach to sharing and exploring research evidence with people; one that is less focused on ‘implementation’ and more around making connections with people’s existing evidence such as ‘lived experience’. Such an approach is not only respectful of people, but also pragmatic. Contexts vary widely in human services, which require practitioners who are able to use diverse types of evidence to do the right thing, in the right way, at the right time. To this end, the psychologist Barry Schwartz, suggests they need to be like jazz musicians:

‘Don't get me wrong. We need rules! Jazz musicians need some notes… but too many rules prevent accomplished jazz musicians from improvising, and as a result, they lose their gifts, or worse, they stop playing altogether.’
— Barry Schwartz, psychologist

Beyond death by PowerPoint and the call for stories

A lot of research dissemination seminars consist of delivering PowerPoint presentations, with research findings listed as bullet points. Not surprisingly, these findings can all too often go in one ear and out the other. During the initial DEEP project, we quickly came to recognise that people are story-telling beings who make sense of the world through narrative rather than bullet points. To quote the author Terry Pratchett:

‘People think that stories are shaped by people. In fact, it is the other way around.’

Our initial DEEP work with Joseph Rowntree Foundation was focused on improving services for older people with high support needs. One of the research messages we wanted to convey was:

Often it is the simple things that bring the most pleasure (and the lack of them can bring a sense of sadness and loss) and services do not always seem to be very good at delivering “the ordinary”.
— Imogen Blood, A better life: valuing our later years

Whilst this statement makes sense, it is devoid of emotion. As a result, when shared it, it did not touch the heart or capture the imaginations of the care staff we shared it with. However, the situation changed when we discovered a real-life story that encapsulated this research finding. It was shared with us by Carol, one of the DEEP project participants who lived in a nursing home.
‍

'Now I am in a care home, I feel that I am just existing. I am just waiting to die. Things were different when I lived in the community. When I lived in the community, I felt I had a life. A part of that life was my Friday treat – I would get a taxi to Waitrose and buy myself a Heston Blumenthal prawn cocktail. It was something to look forward to. Now I am in the nursing home, I don’t get my prawn cocktail.'

·       Did reading the research bullet point (above) have the same effect?

·       Can you see how the story contains both lived experience evidence from Carol as well as an important research message?

When this story was shared with the care home staff, it upset them – it created an emotional as well as intellectual response: 'Oh no, we never knew she liked prawn cocktail.' The staff engaged with this evidence and wanted to do something about it. They talked with Carol and came up with a solution – they would arrange for her to have a mini-fridge in her room. This they did, enabling Carol to have her prawn cocktail on a Friday and maybe a bit of chilled Prosecco at the weekend too! The staff were using evidence in practice, although may not have thought about it in these terms.

This revelatory discovery led to us working with a wide range of people living and working in care homes, drawing out their stories of experience which illustrated the research messages that we wanted to convey.  The stories were termed ‘magic moments’ and we pulled then together into a book, which was then used as catalyst for exploring and co-producing improvements to policy and practice. The book is available to read here.
‍

There’s more to talking together than meets the eye

As part of the DEEP project, we brought together mixed groups of practitioners, managers, people supported by services and their unpaid carers, along with researchers, to explore the stories and think about the implications for policy and practice. However, we soon discovered that many of the participants had very poor experiences of talking together with others, as illustrated by the following quotes:

·       ‘We used to talk with our managers, now we have policy briefings’ (frontline care worker)

·       ‘We have lots of meetings, but we don’t meet in the real sense of the word’ (social work team manager)

There is an assumption in co-production that people talk and think together well, but this is deceiving. We were fortunate to come across the work of educational academics, who specialise in speaking and listening, and a practice they call ‘interthink’. (Mercer and Littleton 2007).

They identify three ways in which people talk and think together, which are:

This is the sort of talk that takes place in the House of Commons – “I’m right and you are wrong, and I am going to argue with you until you back down, see sense and come around to my point of view”. People do not learn a lot in Disputational Talk and more often than not, they get annoyed and frustrated.

This is the sort of talk when people are in a meeting and they all go along with what’s been said, without challenging or questioning each other. There are several reasons for this, including:

·       A fear of reprisal or being told off afterwards, e.g. “Why did you say that in front of health services?”

·       A fear of looking stupid, especially if other people appear to be much more intelligent than you.

·       Not wanting to upset anyone, e.g. “I didn’t agree with what she said, but she’s such a nice person and I didn’t want to hurt her feelings”

Cumulative Talk meetings tend the be the ones where people come away afterwards and say things like “Well that was a waste of my time” or “Who does he think he is?” People do not learn a lot in Cumulative Talk.

This is the sort of talk where people feel valued and safe and encouraged to say exactly what they think. In Exploratory Talk, however, they must give a reason for anything they say. Other people are encouraged to respectfully agree or disagree by saying things like “I hear what you are saying, and I agree/disagree because…” or “I have an example of that…” or “I have a counter-example which suggests something different…”

In Exploratory Talk, when one person has spoken, the next person speaking must make a connection with what has been said and build on it. They cannot cut across the conversation by starting a completely different subject. In doing this, the individual contributions knit together in a journey of discovery, with an aim to move towards a shared understanding of the issue being discussed and the different perspectives.

Through applying the ground rules for Exploratory Talk, we were pleased to see progress in people engaging with the research findings as well as sharing and engaging with their own evidence in a truly co-productive manner. This was assisting by ensuring that everyone was well versed in an old Indian fable about an elephant and six blind people who stand around it. In this fable, each person sees the elephant from a different perspective. The important thing is to value and use the different perspectives to get the full picture of the elephant.
‍

As a result of our appreciative, story and dialogue-based approach to engaging with and using evidence, we were pleased to see significant improvement in a range of policies and services, as well as improved wellbeing for older people, carers and staff. You can read more about these in the project report. From 2020-23, the DEEP approach is being strategically embedded in the learning, development and performance work of national organisations, including Social Care Wales. If you'd like to find out more about DEEP then please get in touch with Nick.

Schwartz, B. ‘Our Loss of Wisdom’ TED Talk available at:  https://www.ted.com/talks/barry_schwartz_our_loss_of_wisdom?language=en

Could you be a Co-Pro Collective Community Area Pioneer?