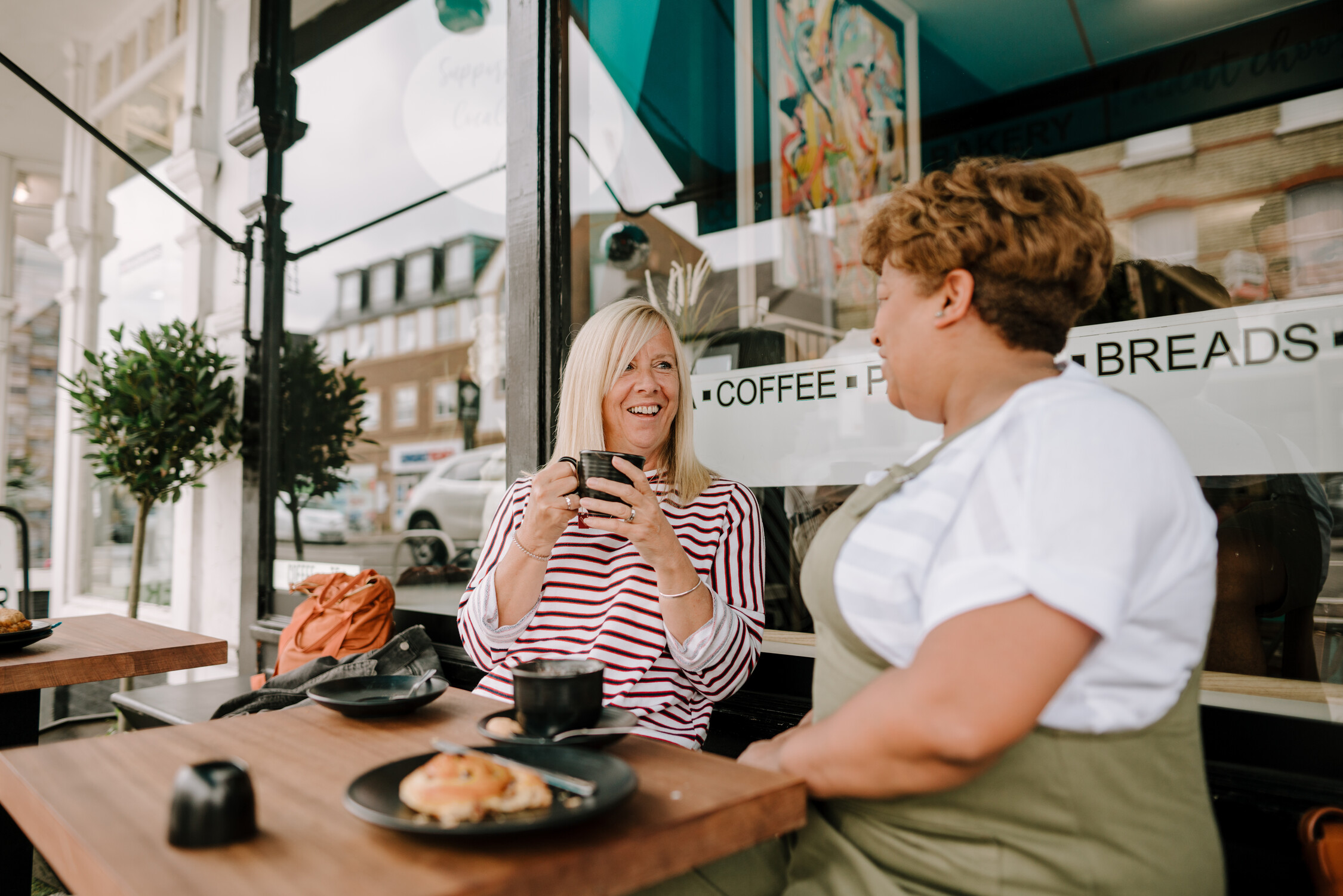 A personal account from Pat on how to work co-productively, the power of lasting partnerships, and her experience taking part in Co-production Week Scotland 2021.

Co-production Week Scotland, then and now

A year ago, I attended some meetings run by the Scottish Co-production Network at their Co-production Week 2020, and one of the people there was Lynn. What she was saying resonated so strongly with me that I said “Can we talk?”, and we did. For the past year or so, we have been talking, meeting, working together. One of the things we were planning to do for Co-production Week 2021 was a workshop exploring Lynn’s experience of co-production as well as my own.

For me, it’s always been instinctive to work in a co-productive way. Lynn often says co-production is not a way of working but a way of being. But for me, since returning to employment, it was a way of working, though at the time I would not have used the language of co-production. After bringing up a family, I started working with people with learning disabilities. Then in 2006, I read a book called Journey to the Interface and that’s when I learned the language and that what I was doing was called co-production. Working in Scotland some twenty years ago, it was extremely frustrating to see the language of co-production being used publicly by the government while, from my point of view, the definition that was used had nothing to do with co-production. They were talking about co-production between organisations, and there was no recognition of the importance of the voices of people with lived experience. I continued to do the things I was doing but became disengaged from the policy level.

This year, I went to four events during Scottish Co-production Week. At the first event, Susan Paxton made the point that co-production is happening in pockets, but it is not mainstream. Another one was run by the Scottish Consortium of Learning Disabilities looking at human rights, led by a youth worker and a person with lived experience. It was a powerful workshop, I really enjoyed it. Then there was one about lived experience led by the people running the Co-production Week which touched on a lot of the themes. There were some people there with lived experience. The fourth event was fascinating, run by a new member of staff from the Welsh team on the history of co-production.

Lynn and I were part of a group brought together to help co-produce the week this year, it sort of happened for a while and then sadly dropped off. Unfortunately, the attendance at events was disappointing, making me wonder how the events were advertised, whether it was less than last year and if so, then what that was about. The other feeling I had about the Co-production Week Scotland this year was that all the workshops (except for the one by SCLD) were led by salaried employees, not by people with lived experience like us. Although the SCLD workshop was led by their co-ordinator, most of the input and the responses to the many questions were by the members.

Initially, there were a lot of themes developed about challenges, payment, the time it takes to build relationships, and power. But without working in true partnership, all of these areas for improvement cannot be addressed. I was going to talk about my personal experience working in such a partnership at workshop at The Scottish Co-production Week this year. Unfortunately, due to unexpected illness, we were not able to deliver it. Hopefully, we will be able to do so next year, but for now I am sharing it here.

Co-producing research, from start to finish

About two years ago, through my work with the Intergenerational National Network, I got to know some researchers working on a project called Place Age, which was about age-friendly cities and communities; in World Health Organisation terminology, this means friendly for older people. Working with people in Brazil, India, England, and Scotland, everybody they met said “This is all very well, but we don’t want to live in ghettos, we don’t want to live in silos. We want to live in communities that are across all age groups.” So, they started realising that age-friendly isn’t just about older people, it’s about all ages, it’s cross-generational.

I got involved towards the end of this project and met Professor Judith Sixsmith of the University of Dundee, who was interested in how we can ensure people grow older in the place where they wish to grow older. She and I sat down and had a coffee to discuss the topic coming from two perspectives: ageing in place and intergenerational approach. Then we started to put together a research project and brought a lot of people around that table. People with lived experience, community members, a youth worker, and researchers. We got together(before the COVID-19 pandemic) in a room in Dundee. The energy around that table was unbelievable.

How was this possible? What made true collaboration happen? At the end of the day, it was down to Judith, the professor putting the research project together. She once said tome, “I am very selective who I work with”. She chooses to work with people who understand the way she works.

We got funding from the Scottish Universities Insight Institute (SUII) and, over the course of a year, the project was meant to be taken to six different communities across Scotland. And then COVID-19 hit, and we had to move it online, which was very disappointing. Regardless, we carried on with it. What we were exploring was intergenerational place-making: how can we make places and spaces friendlier, more welcoming, comfortable, affordable, accessible, for people across all generations? The project was working really well, so it was about to be presented at a conference in Quebec. One of the researchers and myself were given funding to go and present in person. In the end, I did attend but, due to the pandemic, only virtually. Still, in principle, they would have funded me to present as part of the team.

‍Every piece of research that came out of that project has my name on it. I was absolutely, a hundred percent, part of the project, from the very seeds of it in the beginning, through to its culmination. It was an amazing experience.

Why is this not always the case? I have seen organisations saying their work Is community-focused but they don’t allow time to actually work with communities. The big message for me, in terms of research culture, is that if you are serious about engaging with people with lived experience as part of research, you need to build in that time. Ideally, you would put in that time before you even submit the research bid. I’m not sure how that would happen, it really requires a bit of pre-funding. Even if that’s not possible, research funders have to understand that, if they really want the best results, then they have to engage with people with lived experience. That’s the only thing that will stop you making false assumptions and bad decisions. This costs time, and as a result, costs money. ‍

Funders need to understand that it should be not just legitimate, but I would argue essential, to build in that time to make sure you are actually listening to the people whose lives are going to be affected by research.

We are always excited to publish reflections on lived experience and the co-production journey. Let us know if you would be interested in writing for us. Drop us a line at coproduction@ucl.co.uk to get in touch!