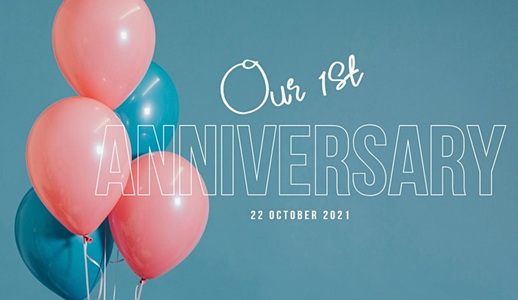 In just a few weeks, the Co-production Collective is turning one year old and we want to celebrate with you by reflecting on the last 12 months.

This month marks one whole year since Co-Production Collective was launched and we can’t let it pass by without a celebration! Everyone is welcome to join us on Friday 22 October, 1-3pm, where we’ll be checking in with Our Direction 2020-2022, to see what we have achieved in the past 12 months and where we're headed, as well as much more. If you haven’t already, book your place now!

Though Co-Production Collective may only be one this year, our co-production journey started back in October 2017, with the inception of the UCL Centre for Co-production. We worked on developing the Centre as a mixed group of members of the public, researchers, patients, carers, health care practitioners, charities, local authorities and students - really anyone who was interested in co-production - and three years later almost exactly on the very day, we were ready to unveil our new name, look and strategy!

It’s hard to describe what the launch day meant for all of us, especially since our name and look feels so familiar now. Thankfully, there were plenty of blogs written leading up to the event as well as summarising it afterwards, plus the entire event was recorded and can be viewed in full, so there’s lots of nostalgia to look back on!

In a way, it was lucky that the launch event had to be online; at least finding a big enough venue for hundreds of co-producers was not issue and we could bring people together from across the country - and the globe. We’re still co-producing together online a year later and as we did before, though we can't promise anything quite as exciting as our launch, we’re co-creating the event itself with a group of co-producers.

How was the year for you?

One year is a long time to summarise in just one sentence, one feeling, or one image. This is why we’d like to co-produce a collection of highlights to celebrate our first birthday as Co-Production Collective. To do this, we need to hear from you! We’d love to know your ‘best bits’ from the past year, both relating to Co-Production Collective and more generally.

To get you started, our anniversary planning team (co-producers Judy, Sylvia, Al and Rory) have suggested some questions you might want to consider:

You can answer these, or you can share anything else about your experience this past year. The board of sticky notes below shows the questions in orange and some example highlights from Al, Sylvia and Judy in blue. You will probably have completely different responses – there are no wrong answers!

We’ll bring all the highlights you share together into a scrapbook of memories from Co-Production Collective’s first year, which we’ll publish here on our website.

You can email us at coproduction@ucl.ac.uk to share your highlights. This can be a sentence or two, any images, documents, or drawings that capture your past 12 months as a co-producer.

We’ll also be celebrating and share our highlights on social media, using the hashtag #CoProHighlights leading up to the birthday event as well as on the big day. So, if you are posting your highlight on Twitter, be sure to use this hashtag and tag us @UCL_CoPro so we can see it. You can also send us a direct message.

Our anniversary event is on Friday 22 October so you can send your highlights in advance and/or share them during the celebrations. We’re really looking forward to reflecting on the past year – and looking forward to the next – with you and the whole Co-Production Collective community.

Could you be a Co-Pro Collective Community Area Pioneer?